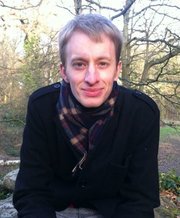 PhD Student at the University of Reading

“Ezra Pound's Early Cantos and His Translation of Takasago.”

In 1917, Ezra Pound wrote to Harriet Monroe that the ‘theme’ of The Cantos was ‘roughly the theme of Takasago’, a Japanese Noh play. Hugh Kenner in The Pound Era referred to this letter but did not elaborate on it, commenting that Pound ‘never got round to’ the translation of Takasago. It has more recently been discovered, however, that Pound did translate Takasago. In light of this discovery, I wish to contend that the play is an important structuring device for The Cantos from the latter’s beginnings in 1915 into the 1920s, and, furthermore, that the foregrounding of benevolent imperial rule in Pound’s Takasago translation anticipates his turn in the 1920s from the apparently apolitical poetics of the ‘Unity of Image’ to a more explicitly political ‘symbolism of the center’. I will do so by referring to original Japanese versions of the play; by examining Pound’s drafts for the early cantos, and by analysing the peritexts of these cantos in editions published by small presses in the 1920s. 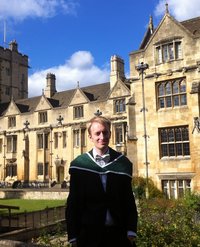 I was born to Dutch parents and grew up in Paris and Cambridge. This international upbringing has given me a natural curiosity about the relationships between different languages and cultures. As a teenager, I began reading poetry by Pound, Snyder, Li Bai, and Bashō. This early fascination for the Far East led to a gap year spent teaching English in Beijing before I started a BA in English Literature at the University of Bristol. In my third year, I was granted a scholarship to study Japanese language at the Aichi Prefectural University in Nagoya. Since then, I have developed a deeply-rooted interest in the literary connections between Japan and the West.

My Master’s dissertation at the University of Oxford was on Ezra Pound’s early Cantos and his translation of the Noh play Takasago. At first, I had simply been interested in Pound’s comment to Harriet Monroe in 1917 that The Cantos was based “roughly on the theme of Takasago,” but was further intrigued to find that he had, in fact, translated this play (though it was not published in his lifetime) and considered it to be at the “very core” of Noh. It became an important structuring device for The Cantos during the early years of the latter’s composition. The dissertation was completed in 2011 and published in the Review of English Studies in April 2014.

Since finishing my Master’s, I have completed an AHRC-funded PhD on the translation and reception of modern Japanese poetry in the Anglophone world. The thesis focuses on a period of increased interest in such poetry after the war. Modern Japanese poetry had been influenced by Symbolist and Surrealist poetry and often lacked the visual concreteness of Imagism; it was altered by translators and publishers “into something more Imagist” in order to make it more palatable to Anglophone readers. The AHRC also funded a three-month studentship in Tokyo. During this time, I was also able to find and interview the Arechi poet and translator of modern Japanese poetry, Professor Kajima Shōzō, in the mountains of Nagano.

I am now working on two articles: one on the influence of the Poundian/Fenollosan “ideogrammic method” on the post-war Japanese concrete poet, Niikuni Seiichi, about which I hope to give a conference paper at the forthcoming EPIC at Brunnenburg; and one on Basil Bunting’s adaptation of Kamo no Chōmei’s Hōjōki.

I am also a keen poetry translator. My translations of the Dutch poet Esther Jansma were read at the Reading Poetry Festival in 2013 and published in Modern Poetry in Translation in April 2015.

I am currently also collaborating with Dr Chikako Nihei on translations of post-war Japanese poetry.