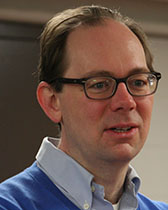 Steles. With Timothy Billings. A translation and critical edition of Victor Segalen’s Stèles. Wesleyan University Press, 2007 (Winner of the MLA’s Aldo and Jeanne Scaglione Prize for a Translation of a Literary Work)

“‘I am All for the Triangle’: The Geopolitical Aesthetics of Pound’s Japan.” Ezra Pound in the Present. Eds. Josephine Park and Paul Stasi. Bloomsbury, 2016.

Literature sub-editor for the Routledge Encyclopedia of Modernism.

“Responding to Death of a Discipline: An ACLA Forum.” Comparative Literature 57. 3 (2005). With Eric Hayot