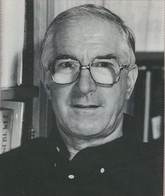 Walter Baumann was born in Switzerland and studied at the Universities of Zurich and Aberdeen. His academic teaching career in German Studies started at Toronto University and continued at the University of Ulster in Northern Ireland. He published on J. W. Goethe, H. Broch, and M. Frisch.

Walter has done more than any Poundian alive to create and sustain a sense of scholarly community in the discipline of Pound studies. He published in Paideuma often, was active in the organisation of the international Pound conferences and since 1990 he has created a lasting photographic record documenting the history of our scholarly interaction over the years.

His major work, Rose in the Steel Dust is one of the classics of Pound studies. Most of the collected essays gathered in Roses first appeared in Paideuma.