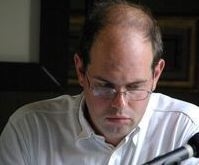 David Ten Eyck is currently working as the junior editor, in collaboration with Ronald Bush, on a new critical of Ezra Pound’s Pisan Cantos. This edition is in its final stages will be published in three volumes by Oxford University Press (probable publication date 2015). It traces the compositional and publication history of the sequence from the war-time drafts that Pound wrote in Italian to the final modifications made by New Directions to the published text of the poems in the 1970s. The section of the edition on which David Ten Eyck has been most actively involved offers a newly edited text of the Pisan Cantos (based primarily upon the typescript Pound produced while incarcerated at the D.T.C.) together with a critical apparatus that provides a full history of all textual variants.

In parallel with this work on the Pisan Cantos, David Ten Eyck is continuing to produce a series of scholarly volumes on Book History and Textual Scholarship as part of an ongoing project at the University of Lorraine in France.